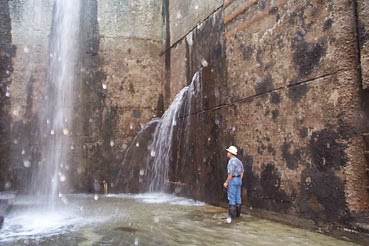 Yet, it appears that Castille has leaked secret information about this new grand jury examining Kane:

“Chief Justice Ronald D. Castille told reporters that some of the documents in question constituted grand jury material, which would be confidential…. Questioned by reporters at the annual Pennsylvania Society gathering in New York, Castille countered that at least one of the documents that appeared in the Daily News story should have been confidential. ‘It was a detective's statement,’ said Castille, speaking to two reporters at the Metropolitan Club.” (Philadelphia Inquirer 12/14/14)

So, because of grand jury secrecy rules, there is a detective’s statement that Kane should not have provided the Daily News. If she is precluded from revealing it because it is secret, then how can Castille discuss it?

Furthermore, would not Castille’s revelation that the detective statement is at the center of the new grand jury investigation be a further violation of grand jury secrecy rules?

The law is incredibly clear that Castille is violating the law because discussing anything in a grand jury is verboten:

We suppose that Castille could say that he is not violating the secrecy rules because he wasn’t sworn in as part of the Mondesire grand jury proceedings.  Fair enough, but that in turn raises further questions.

First, how much different would this excuse be than Kane’s for leaking information from the Mondesire grand jury:

“Reading prepared remarks, [Kane] acknowledged that her office had released information, but said it did so ‘in a way that did not violate statutory or case law regarding grand jury secrecy.’….’Nothing she said suggested in any way that she committed a crime - because she didn't commit a crime. She didn't cross any ethical line," said Gerald Shargel, a New York City criminal defense lawyer.” (Philadelphia Inquirer 11/19/14)

It sounds like Shargel’s interpretation of the law is based on his reading of Title 42 which seems to give Kane wiggle room from Rule 556.10 given that she was not part of the Mondesire grand jury, and consequently, not sworn into secrecy:

“a juror, attorney, interpreter, stenographer, operator of a recording device, or any typist who transcribes recorded testimony may disclose matters occurring before the grand jury only when so directed by the court. All such persons shall be sworn to secrecy, and shall be in contempt of court if they reveal any information which they are sworn to keep secret.” (Title 42 Subchapter D Section 4549)

Ugarte,
Thank you for pointing out the hypocrisy of the Chief Justice and the ever present "leaks" associated with Pennsylvania Grand Juries.

Castille inserted himself into a Grand Jury matter. Members of the legal community would be reprimanded for such actions.

Grand Jury secrecy prevented the Sandusky/DeNaples Grand Jury Leak Report from being made public. So who was protected?

The Montgomery County Grand Jury Special Prosecutor was authorized by Chief Justice Castille. Associated with the Grand Jury investigation is an Order preventing Frank Fina from being named by the Attorney General of the Commonwealth in any capacity. Strange?

It has been reported that Fina was actively involved in the pornographic email scandal that infiltrated the judiciary and the Office of the Attorney General.

Who is being protected at the expense of the Attorney General?
We need to hear the truth.

What does Fina have on people? The man has paralyzed the criminal justice system. We need an investigation of the cases left by Fina for Kane to fall into. Seems like the criticism has been orchestrated.

This is an Alice in Wonderland world of leaks about leaks and challenges not only the integrity of the present AG but of the entire process of Secrecy of Grand Juries after the decisions have been made!

The who replaces the why and we remain victims of political correctness instead of citizens being informed about the deeds of our police, courts, and other facets of our society after the decisions are made.

No wonder we have problems in Ferguson and other areas of deciding how to remedy our justice and enforcement systems.

Grand Juries are being used to set free Police, Prosecutors, and Judges from Indictments but then used to indict political opposition and private people for crimes controlled by Prosecutors that leak such details illegally?

The abuse discovered by an independent Grand Jury Special Prosecutor should be made public.

Prosecutors stand to benefit from leaks. Court staff and Grand Jurors would be too frightened to talk to reporters.

All Media, Newspapers and Attorneys should be demanding the release of all Emails under Corbett-Kelly-Fina Prosecutors along with the many Judges (And There Are Many Not Just A Few) connected to the Illegal use of State Computers on State Time by these State Employees to be released to the Public under the Open Records Laws and go to Federal Court to cause their release right away.

This is the kind of light that shines on Frank Fina's Gang of Secrecy with some Judges they are hiding behind in attacking AG Kane!

As an example of how common grand jury leaks are, you could have cited this grand jury.

We have known everything that is going on for months. Or you could have cited the statewide grand jury investigating bonusgate.

Where are the results of the investigation into the Grand Jury leaks in the Sandusky case?

Was the investigation ever completed?

I smell something fishy...follow the money...that went from The Second Mile Campaign Contributors to...Tom Corbett's Campaign?

The truth must come out and she needs to sustain the attacks. This is politics at its worst. In Pennsylvania, witnesses are allowed to discuss their Grand Jury testimony.

Why is AG Kane being threatened when Frank Fina leaked many Grand Jury Reports prior to his Indictments and not one Judge was upset about it?

It is not the duty of the OAG to investigate District Attorneys. A complaint shoud be filed with the commonwealth court in the county the DA represents.(b) Upon complaint in writing, verified by oath or affirmation of the party aggrieved, made to the court in which any district attorney shall prosecute the pleas of the Commonwealth, charging such district attorney with wilful and gross negligence in the execution of the duties of his office, the court shall cause notice of such complaint to be given to the district attorney and of the time fixed by the court for the hearing of the same. If upon such hearing the court shall be of opinion that there is probable cause for the complaint, they shall hand over or commit the district attorney to answer the same in due course of law. If the court shall be of opinion that there is no probable cause for such complaint, they shall dismiss the same, with reasonable costs to be assessed by the court.

Section 1406. District Attorney Charged with Crime.--If any district attorney is charged, according to law, with any crime or misdemeanor, before or bound over or committed by any court to answer for wilful and gross negligence in the execution of the duties of his office, it shall be the duty of the court to appoint some competent attorney thereof to prepare an indictment against such district attorney and to prosecute the same on behalf of the Commonwealth until final judgment. Such attorney shall be paid by the county for his services a reasonable compensation to be fixed by the court. If such district attorney shall be convicted of any crime for which he may be sentenced to imprisonment by separate or solitary confinement at labor, his office shall be declared vacant by the court.

Is this the legal system protecting the citizens of PA? It appears the judiciary was helping the prosecutors.

After reading this post I thought the importances of security and investigation.A proper investigation should be carried out when-ever there needed.

This could be one specific with the most beneficial blogs Dr. Phillips Lawyer We have ever arrive across on this subject. Really Wonderful. I’m also an expert in this topic so I can understand your hard work.