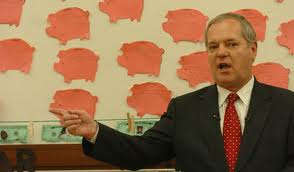 While Harrisburg's self-proclaimed pundits and gasbags attempt to explain what former state Rep. John Perzel's guilty plea really means, (or more likely, whom he agreed to throw under the bus), we think it's worth examining what led to this moment.

First, though, we must correct an inexplicably ubiquitous error in the chronicling of the Perzel story. You will read and hear in nearly every media report that Perzel is accused of misdirecting $10 million in taxpayer funds. This is blatantly false, and we can't comprehend why it's been so consistently misreported. As anyone who has read the grand jury presentment concerning Perzel - admittedly, that probably doesn't include most of the Capitol Stenographers Corps - can tell you, Team Perzel is accused of misappropriating $20 million in taxpayer funds.

It's right there on the first page: "This presentment will disclose that a vast array of public expenditures, exceeding twenty million dollars, were spent between 2000 and 2008 by the House Republican Caucus ..."

Let's add it all up:

That's $20.8 million right there, without including the unspecified costs of "miscellaneous uses of public resources for campaign work" and the salaries and benefits of the Office of District Operations - "a taxpayer-funded, wholly owned campaign subsidiary of the House Republican Campaign Comittee."

What's the big deal? you may ask. Isn't $10 million serious enough? Aside from being inaccurate, the $10 million figure simply doesn't convey the true scope of the House Republicans' alleged criminal enterprise - an enterprise that Gubernatorial Candidate Corbett was more than willing to overlook, until questions about partisanship arose, and until a secret meeting with Perzel that belatedly appeared to trigger the investigation. Subpoenas were issued three weeks after the meeting.

While Corbett was busy lying that the case against the Democrats was a priority because they were (wrongly) suspected of destroying evidence (a suspicion that didn't arise until more than six months after the investigation began), the House Republicans were busy actually destroying evidence. Who could have predicted that would happen after Corbett himself gave House Republicans permission to switch out their computers?

We remain at a loss to explain why Corbett, ostensibly a trained lawyer, claimed that he needed probable cause that evidence was being destroyed in order to seek evidence.

Not that he had any intention of seeking any kind of evidence against House Republicans at that time. Months after executing a search warrant on House Democrats, Corbett was still accepting campaign contributions from and secretly meeting with the supposed targets of his "investigation."

Because Corbett treated Perzel's alleged crimes like an afterthought, the reporters who lap up his every pronouncement as gospel have treated them that way, too - not even bothering with more than a cursory glance at a press release. Even though the very "facts" they were reporting showed that Perzel's alleged crimes were far more serious and far-reaching than Veon's, they took their cue from Corbett and proceeded as if Perzel's crimes paled in comparison to Veon's.

We have no idea what the Office of Attorney General promised Perzel in exchange for his guilty plea, or what else Perzel threw into the bargain, but it's worth noting that an elected official facing 82 felonies, representing $20 million, was permitted to plead to fewer counts than a staffer facing 47 felonies, representing less than $2 million.

We hope prosecutors found a better bargain in Perzel than they got in Mike Manzo.

UPDATE: One member of the Capitol Stenographers Corps tells CasablancaPA that the Office of Attorney General claims although the House Republican Caucus spent in excess of $20 million, Perzel himself was responsible for only $10 million of that. Which of course begs the question - unasked by the Stenographers, naturally - why no one was charged in connection with the other $10 million. Eh, it's probably not important .... right?

CORRECTION: Mike Manzo was originally charged with 47 felonies. The original post misstated the number. We made the mistake of relying on a Post-Gazette story by Tracie Mauriello. Yes, we should have known better.
Posted by Signor Ferrari at 3:17 PM 11 comments:

All due respect, Your Honor, but how the hell would you know?

You never heard one word of testimony or laid eyes on a single piece of evidence in the Commonwealth's 12-count felony case against Mrs. Manzo. Is there a crystal ball hidden beneath those robes? Or do you just feel somehow that she was the "least involved?"

What we really want to know is how you can say that someone who pleaded guilty to involvement in a crime was "less involved and less culpable" than people who were actually found not guilty of that same crime?

And everyone's buying it?

The problem here is everyone knows that the charges against Mrs. Manzo were withdrawn in exchange for her husband's testimony. Not her own - she never testified in the case. But prosecutors for some reason can't admit that they used charges against one person to leverage testimony from another. Instead, Chief Deputy Attorney General Frank Fina mumbles some unproveable nonsense about providing investigators with valuable information - so valuable, apparently, that it never was entered as evidence in a courtroom anywhere on this planet.

Fina admits that Mrs. Manzo participated in "a plan to distribute more than $1.8 million in tax dollars to House Democratic staffers as rewards for campaign work." She pleaded guilty to a misdemeanor theft charge in connection with that "plan."

Yet every staff member who went to trial on charges related to that "plan" was found not guilty of those charges. Maybe Judge Lewis forgot that they were acquitted?

Either Gubernatorial Candidate Tom Corbett erroneously charged Mrs. Manzo with 12 unwarranted felony counts, or he believed she was guilty of serious crimes and let her off for reasons other than her own lack of culpability.