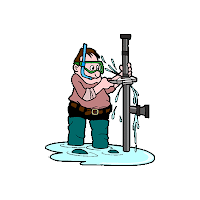 “There was never a Bonusgate leak investigation because there were no leaks - or until you wrote about it yesterday - any allegation that the AG’s office leaked information.” -- Keven Harley, spokesman for Governor Tom Corbett, in an email to Capitolwire's Pete DeCoursey.

Pete Decoursey went on to eviscerate Harley's bogus claim in a July 23rd column  (subscription required). But the fact that it even occurs to Harley to spew such obvious nonsense is evidence of Corbett's clear confidence that his word is unlikely to be questioned.

Anyone who paid attention to the media coverage of Corbett's partisan propaganda exercise known as "Bonusgate" knows the grand jury leaked like a sieve.

CasablancaPA documented more than a dozen leaks to former Post-Gazette reporter, now high-ranking Corbett aide (what a coincidence!) Dennis Roddy, alone. Harley's straight-faced claim "there were no leaks" is a breathtakingly bold lie.

Harley claims as fact that none of those ....  whatever he wants to call them, since "there were no leaks" - came from the Attorney General's office. How does he know? He doesn't, because no one ever tried to find out where they came from. And why didn't then-Attorney General Tom Corbett - who, DeCoursey noted, "is death on leaks" and "says often the letter of the rules must be followed" on grand jury secrecy - ever try to find out who was leaking grand jury information?

Apparently because  -- despite the repeated and constant publication of intimate details from a grand jury -- no one ever claimed there were leaks.

Harley called on DeCoursey to "Name the leaks [Pssst! Over here!] and prove the attribution or back off that one.”

"I not only believe it to be true, I have multiple sources over the years from your past and present colleagues who said it to me," DeCoursey responded. "I stand by what I wrote.”

The question of whether the observations of convicts  (or anonymous bloggers) are "b.s." in this case may be irrelevant, since DeCoursey - who is not a convicted criminal , as far as we know (though we suppose he could be an anonymous blogger;  we never issued a subpoena to find out) - makes the same observation. And while we commend DeCoursey for practicing actual journalism in the face of obvious lies from Corbett's office, Harley's audacity is the direct result of getting away with lying far too often, for far too long. 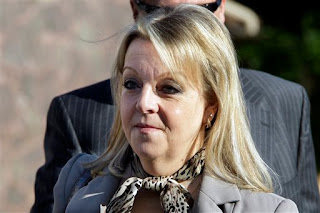 Who could fail to be amused by Governor Tom Corbett's recent rant defending his investigation of sexual predator Jerry Sandusky?

"You are disparaging the reputation of the men and women in that office who have worked very hard to get to the result - that justice was served and a monster was taken off the street." (Philadelphia Inquirer 7/14/2012)

The burning question has been why it took so long for Corbett to put investigators onto the monster's trail. But if Corbett wants to bring up the work these investigators eventually got around to doing, we're happy to take a look at the top-notch, professional, probing interrogation his key lieutenant put to Joe Paterno - who, it turns out, was Sandusky's chief enabler.  Here's how tough and relentless Jonelle Eshbach was in getting to the truth:

"State investigator was a fan: If that was the culture that permeated Penn State, could it have affected the investigation by state attorney general’s office? Jonelle Eshbach, the senior deputy attorney general who interviewed Paterno, several of Sandusky’s victims and Penn State officials when they appeared before the grand jury, has not been shy about her loyalty to the late coach. After Paterno’s divisive firing, her Facebook page showed she took a survey about the board’s decision. Her page says she answered that she would have let Paterno finish the 2011 season, then retire as he planned. Freeh’s team concluded that Paterno’s firing was warranted. Eshbach didn’t return a message at her office. Attorney general spokesman Nils Frederiksen declined to comment on it...When she interviewed Paterno, Eshbach specifically told him to explain what he knew about the McQueary incident, 'without getting into any graphic detail.' She also never followed up when Paterno hinted that something about an earlier claim might have been discussed in his presence prior to that. 'You did mention — I think you said something about a rumor. It may have been discussed in my presence, something else about somebody,' Paterno said at the grand jury. 'I don’t know. I don’t remember. I could not honestly say I heard a rumor.'” (Patriot News 7/12/2012)

Wow.  Specifically asking a witness before the grand jury to withhold details? No follow up to key parts of the witness' story?  In fact, in December of 2010, Eshbach turned down interview requests from the York Daily Record, saying it would be inappropriate at that time, yet she conducted a Facebook survey about Paterno and made supportive comments about Paterno while the investigation presumably was still in progress?

There was nothing tough or professional in how gushing Paterno fan Eshbach handled her idol.  For Corbett to use Eshbach and other members of his team as examples to excoriate journalists for doing their jobs in a tough, insistent, professional manner - tougher and more insistent than Corbett's team -  is shameful.
Posted by Ugarte at 1:08 PM 114 comments:

BY LUCK, OR BY DESIGN? 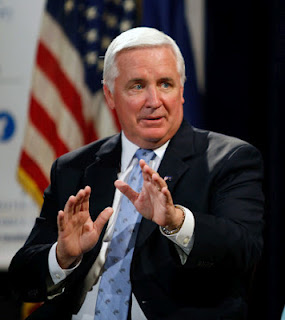 We don't know who leaked emails implicating Joe Paterno in a coverup of Jerry Sandusky's crimes, but we know of only one person who benefited from the leak: Tom Corbett.

Six days before CNN reported on the emails, the Altoona Mirror reported that the Regional Director of the Attorney General's State College Office admitted Corbett's obsessive investigation of the legislature created a shortage of investigators, impeding the effort to put Sandusky behind bars.

Corbett already was in the midst of a national campaign to defend once again the shocking, nearly 3-year length of the Sandusky investigation.

What were people saying before the emails were leaked?

ESPN:
"As Pennsylvania's attorney general, he investigated Sandusky for nearly two years but failed to make an arrest" ... Corbett had agressively pursued prosecution of sexual predators, "But this time, he assigned just one investigator to the Sandusky case, say lawyers with knowledge of the arrangement..."

"While the current Sandusky investigation was in its second year, Corbett spent much of his time focusing on the sweeping public corruption inquiry of Democrats and Republicans in Harrisburg nicknamed “Bonusgate.” He also crisscrossed Pennsylvania campaigning for governor, pledging to cut runaway spending and 'restore trust in Harrisburg.' State campaign records show he accepted contributions of nearly $650,000 from current and past board members of Second Mile and their businesses."

Buzz Bissinger in The Daily Beast:
"...the way his office handled the investigation raises inevitable and legitimate questions about why an alleged sexual predator was allowed to remain at large for nearly three years while the grand jury investigated. The question of political considerations cannot be avoided.

"Not only that, but Corbett’s gubernatorial staff approved—yes, approved—a $3 million grant to Second Mile, the foundation for kids that, according to the grand jury, served as a repository for potential sex-abuse victims. Corbett knew about the grant and let it through last July for reasons that seem absurd.

"...in any case where authorities know of an alleged sexual predator believed to have committed a crime, the first obligation is to make an arrest. The risk of Sandusky committing another act against a minor child was too great to wait three years for a report,...

"...it’s no wonder that the ooze would eventually touch Corbett. Add him to the lengthening list of those who’ll have to scrub awfully hard to cleanse themselves of the stain."

Deadspin:
"Past And Present Board Members Of Sandusky’s Charity And Their Businesses Or Families Gave $641,481.21 To Gov. Tom Corbett"

The Nation:
"...the governor is far from an innocent bystander .. Although his office denies it, there are multiple confirmations that Corbett assigned no one from his office to follow up on the charges: just one state trooper, a state trooper “not authorized to bring charges against Sandusky.”

"In addition, when Corbett was sworn in as governor in 2011, he still had not informed the Second Mile Foundation that their founder was under investigation. Instead, as a candidate for governor, he took $650,000 in donations from members of the Second Mile’s unsuspecting board, even allowing the chairman to hold a fundraiser for his campaign.

"Upon being elected, Corbett then moved deftly from doing nothing to immediately trying to deflect the entire weight of the scandal onto Joe Paterno and Penn State itself, using his recently appointed position as a member of the school’s Board of Trustees (an automatic appointment for all Pennsylvania governors) to do so."

WJAC-TV:
“There have been allegations of political arm twisting and strong lobbying against lawmakers who have raised questions” about alleged “foot-dragging” on behalf of Corbett."

Philadelphia Weekly:
"...some have openly wondered whether Governor Tom Corbett, while he was attorney general of the state, did enough to investigate and prosecute the former Penn State football coach."

The Examiner:
"Corbett appears to have contradicted himself by stating that he wanted to keep a "hands-off" approach of the pending Sandusky investigation, despite the fact that Corbett was front and center in the firing of Penn State head football coach Joe Paterno and university president Graham Spanier late last year."

Philadelphia Daily News:
"Pennsylvania taxpayers have underwritten nearly $1.4 million in contributions to The Second Mille, the disgraced charity founded by convicted pedophile Jerry Sandusky where testimony showed he groomed some of the boys he later molested. The taxpayer-subsidized donations — which support The Second Mile's summer camp and an annual Leadership Institute — come through a controversial scholarship program called the Educational Improvement Tax Credit..."

Disclosure of the emails successfully diverted attention away from Corbett's role in the scandal.

There are signs of hope, however, that it won't be forgotten. A Bloomsburg Press-Enterprise editorial this week headlined "Scandal questions surround Corbett," noted, "...no governor in memory has been enmeshed in a scandal as big, as emptional, as polarizing as the one that''s enveloped Penn State University since Sandusky's arrest. Corbett's involvement figures to be very much an issue in the 2014 gubernatorial race."
Posted by Signor Ferrari at 2:09 PM 32 comments: