A BRIBE BY ANY OTHER NAME 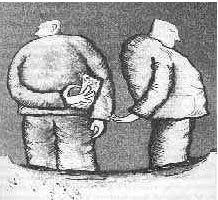 The Pennsylvania political community is abuzz with the revelation that an elected official accepted financial considerations from business owners with the understanding that he would use his elected office to steer favors toward those businesses.

Think we're referring to Sen. Ray Musto, accused of accepting $35,000 from an unnamed construction company in exchange for his help to secure government funding?

No, we're referring to the $1 million Governor-Elect Tom Corbett accepted from the natural gas industry in exchange for his help in blocking a state severance tax on natural gas production and reversing a moratorium on new drilling on state forest land.

While the accusations against Musto are criminal and could land the 81-year-old Democrat in jail, Corbett's transactions appear to be perfectly legal and landed the 61-year-old Republican in the Governor's Office.

While we've accused Corbett of hypocrisy for prosecuting legislators for activity in which he himself is engaged, we can't make that claim in this case. Because despite a multi-million-dollar, four-year investigation of all four legislative caucuses (or so Corbett has claimed), Corbett didn't uncover a hint of Musto's alleged crimes.

In fact, even though Corbett claimed to be investigating the Senate - particularly the Republican caucus, which awarded the largest individual bonuses to staffers who spent most of the year campaigning - and had publicly claimed he would not accept contributions from Senators, he privately told those same Senators it was OK to launder their contributions through the coffers of his running mate.

Once again, the question we must ask is whether Corbett is incompetent or corrupt.

After all, either Corbett really has been investigating the Senate for four long years, (all while indirectly accepting campaign contributions from the targets of the investigation, which actually would make him both corrupt and incompetent), and somehow missed Orie's alleged illegal campaign operation, Musto's alleged kickback and bribery scheme, and Mellow's alleged campaign finance violations. (And, let's face it: God knows what else.)

Or, he never really was investigating the Senate at all and simply put on an act to deflect accusations of conflicts of interests.

It certainly wouldn't be the first time.

But in the case of Musto, we're willing to believe Corbett simply didn't see the crime in exchanging personal financial consideration for government largess.
Posted by Signor Ferrari at 2:12 PM 4 comments: 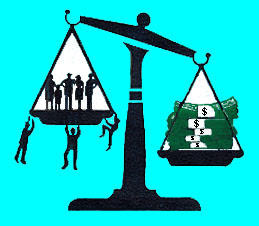 Are we the only ones who see the irony?

In his victory speech on Tuesday night, the very first person Corbett thanked, after his family, was convicted felon Bob Asher.

The 1980s bribery and racketeering case that sent Asher to federal prison has mostly faded from the public memory, and is notable mainly for the tragic public suicide of State Treasurer R. Budd Dwyer.

Asher's involvement? He threatened to withhold campaign funds and political support from Dwyer unless Dwyer awarded a multi-million dollar state contract to a handpicked crony.

The lesson is clear. And Corbett appears to have learned it.

One of Corbett's earliest supporters in his campaign for governor, Asher served as co-chair of Corbett's exploratory committee. Asher's formidable support came as Corbett was in the throes of the political corruption investigation that would serve as the foundation of his gubernatorial campaign.

Remember, Asher tends to withhold support from public officials who don't do his bidding.

If we were the Patriot-News editorial board, this would be the part where we say, "We're not saying that Asher may have used his gargantuan influence to determine the direction of the Bonusgate investigation. But we can see where some people might be disturbed by the appearance of a possible conflict of interest."

Presidential Candidate Rudy Guiliani was foolish enough to be embarrassed by Asher's public support, and hastened to distance himself from the ex-con.

Corbett had no such qualms.
Posted by Signor Ferrari at 10:43 AM 19 comments: