HOW COULD THIS HAPPEN? 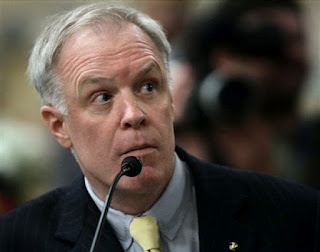 Bill DeWese just cannot believe what is happening to him.

He puts on the bluster when tv cameras are around, boasting that he'll make new friends and stay fit behind bars, but behind the scenes, trust us: he is apoplectic with indignation.

This wasn't supposed to happen. DeWeese paid a former Republican prosecutor $1.7 million in taxpayer funds to make sure DeWeese wasn't swept up in gubernatorial candidate Tom Corbett's politically-motivated "investigation" of the General Assembly.

Though he initially rebuffed Corbett's efforts, DeWeese in the fall of 2007 abruptly dropped his legal challenges, fired seven staff members and handed over to Corbett documents and emails intended to implicate the fired staffers and a former colleague.

On the jubilant day the colleague and staffers were indicted, DeWeese was sure he was in the clear. And he would have been, but for one tiny email that was leaked to the media.

It's unclear whether DeWeese turned over the email inadvertently, or he was convinced nothing he turned over would have any adverse consequences for him. Although he didn't realize it at the time, DeWeese's fortune turned on March 16, 2009, the day the Pittsburgh Tribune-Review revealed that Corbett was in possession of an email DeWeese sent to a staffer who explicitly thanked him for the bonus she received for campaigning.

DeWeese, whose signature was on the letter accompanying the bonus checks, claimed he hadn't sent the email. If investigators ever had believed it, the implausibility and sheer idiocy of the excuse finally dawned on them. What's worse, now the entire state knew that Corbett knew DeWeese had acknowledged bonuses were awarded for campaigning.

How would Corbett ever explain why DeWeese hadn't been charged in the bonus scandal? Fortunately for him, no one ever asked. And when Corbett belatedly covered his ass by charging DeWeese with unrelated crimes nine months later, everyone assumed justice had been served.

Everyone but DeWeese, that is. Whatever the actual terms of DeWeese's agreement to turn over evidence and drop his legal challenges, DeWeese clearly believed that agreement covered the crimes for which he eventually was indicted in addition to the crimes at the heart of the bonus investigation.

Why else would DeWeese so carelessly admit to a grand jury that his staffers did campaign work during business hours from their desks in legislative offices? DeWeese felt no need to choose his words carefully; he was sure the law couldn't touch him.

Pennsylvania will have to wait to learn whether DeWeese's interpretation of his agreement with Corbett is legally sound. As long as there is even a shred of a chance DeWeese will triumphantly return to elected office, he will cling to the fiction that lack of evidence is the reason he wasn't indicted in connection with bonuses.

IT IS ONLY SOMETIMES VERY OUTRAGEOUS WHEN THESE THINGS HAPPEN 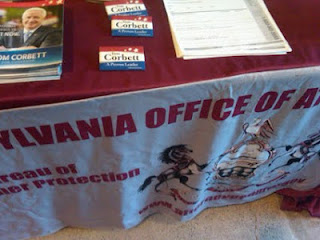 In the days following the sentencing of former Rep. Bill DeWeese and former Sen. Bob Mellow’s guilty plea in federal court (for crimes former Attorney General Tom Corbett either failed to detect or deliberately ignored in his so-called investigation of the Senate), editorialists around the state have treated readers to a litany of lawmakers' transgressions.

Missing from the mass umbrage is any mention of a politician who put his own chief political operative on the state payroll, whose state-paid staffers conferred regularly with campaign workers on state phones during state time, who raised political contributions from the target of his own investigation, whose state-paid staffers distributed campaign literature on state time , and who used his government position to protect his political allies - over and over again.

When Corbett's own top deputy made it crystal clear that all transgressions of this type would be prosecuted as crimes, he didn't mention that senators and would-be governors were exempt.

Although he’s clearly committed the same sins for which he prosecuted others, Corbett inexplicably is spared the outrage. If it’s wrong for Orie, “Fumo, Veon, DeWeese, Perzel, etc.” to abuse their offices for political gain, why isn’t it wrong for Corbett?
Posted by Signor Ferrari at 3:32 PM 10 comments: