WE DIDN'T FIND ANYTHING 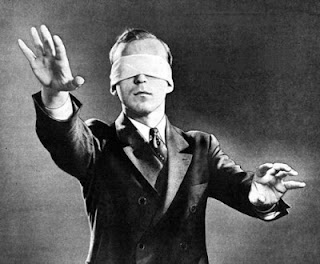 "We didn't find anything," is not an excuse for never looking.

Whenever he has been confronted with the staggering length of time between receiving the first Sandusky complaint in March 2009 and arresting Sandusky in November 2011, Corbett's stock excuse has been, "We needed to find more victims."

But Team Corbett never found another victim through its own efforts. Of the eight victims whose cases were prosecuted, none was discovered by an investigator. Victims 1 and 6, or their mothers, approached investigators on their own initiative. Victims 3, 4, 5, and 7 were identified by the mother of Victim 6. Victims 2 and 8 were not identified before the trial.

It's of course a lie that Corbett couldn't proceed on the complaint of one victim - he did it often when he was Attorney General. But even if you accept that he needed more than one victim to proceed, it doesn't explain what on God's green earth he was doing with the case for nearly two long years.

And even though the first "big break" in the case finally came right after the gubernatorial election in November of 2010 (through no efforts of the Attorney General's office) the lead (and for a long time, sole) investigator (a narcotics agent, not a child predator expert) says, "I never asked for help until 2011."

Corbett, by then,  already was safely ensconced in the Governor's Office.

The "we didn't find anything" excuse is even lamer in the case of the Senate Republicans, because we know that a whistleblower tried to give Corbett evidence on former Sen. Jane Orie, and Corbett's office turned her away.  After some initial scrambling, Corbett settled on the story that a receptionist in his office told the whistleblower to call the Allegheny County D.A.'s office. Not only are we expected to believe that a receptionist is the one who makes the decisions about which cases the state Attorney General's office will and won't investigate, but this whopper followed months of Corbett faux-begging the public to call his office to report suspected the legislative wrongdoing his investigators just could not seem to find:

"People have to come forward. We need evidence. If people have evidence, pick up the phone and call. Come and see my agents." -- Corbett in the Patriot-News in February of 2008
"As we obtain additional information, we always consider other charges against other individuals. And, that being the case, I would suggest to you, Larry, if you do have that information you forward it to the Office of Attorney General ... I can get very tired when I hear these people complain about that we haven’t charged other individuals if they have information and they haven’t passed it along. So, I’m going to urge you, Larry, to pass that information along.” -- Corbett on PCN in January 2009.

Furthermore, Corbett allegedly  subpoenaed the Senate Republicans for the very evidence that the Allegheny County D.A.'s office used to indict Orie  in February of 2008.  Yet there it remained, on the Senate R servers, until the spring of 2009.

On top of the Orie fiasco, Senate Rs awarded the largest bonuses in the General Assembly to employees who did campaign work:
Despite all this staring him in the face, Corbett never subpoenaed a single Senate R member or staffer.

CAN'T FIND WHAT YOU'RE NOT LOOKING FOR

"If we’d found anything, we’d have prosecuted." -- Tom Corbett, during a Feb. 20 meeting with the Patriot-News editorial board, on his "mind-boggling" failure to prosecute any Senate Republicans during the apparently six-year-long investigation of the General Assembly (the grand jury still meets). 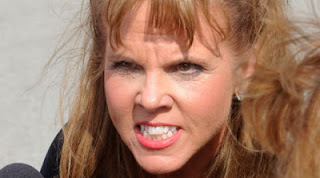 The problem is that there was something to find. We know, because Allegheny County District Attorney Stephen Zappala found it. And he didn't even have to look. Intern Jennifer Knapp Rioja called him up to tell him so.

Supreme Court Justice Joan Orie Melvin, sister of convicted former Senator Jane Orie, today was convicted of illegal campaigning as a direct result of a tip that Rioja tried to give to Tom Corbett, but was turned away.

In 2008, when Corbett's widely-publicized investigation of the legislature was in full swing, a hacker-fearing Orie - knowing full well that evidence of illegal activity was stored there - asked Corbett's office to examine her computers.

Was a guilt-stricken Orie subconsciously trying to get caught? Or was she merely supremely confident she had nothing to fear from Corbett or his investigators?

The question, dear Governor, isn't whether you would've prosecuted if you'd "found anything." It's how you managed not to find what was staring you right in the face.
Posted by Signor Ferrari at 3:42 PM 9 comments:

"OUR JOB WAS TO FIND THOSE KIDS" 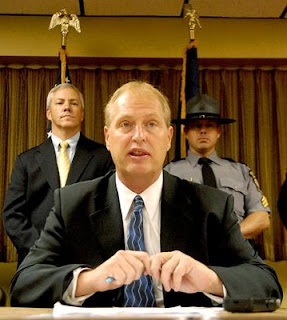 “[W]e felt like we had no shot” winning in court with just a single victim testifying against Mr. Sandusky, who “walked on water” as an assistant for 31 years to the famous Penn State head coach, Joe Paterno.

So they looked for other victims. “You very rarely find a predator in those circumstances who only molested one kid,” said Mr. Feathers, now retired. “Our job was to find those kids.”  -- "Investigation to Focus on Governor’s Handling of Penn State Abuse Case,"  New York Times, 1/29/13

"Our job was to find those kids." But they didn't. Not one.

The now-retired narcotics agent assigned to manage the Jerry Sandusky child sexual abuse case never tracked down a victim. From March 2009 to December 2010 - for 21 long months - not a single victim was identified.

It was journalist Sara Ganim who prompted the mother of Victim 6 to contact investigators in December 2010, and it was Victim 6's mother who identified Victims 3, 4, 5 and 7 using Sandusky's autobiography - apparently it hadn't occurred to investigators to read it, if they even were aware of its existence.

Victim 6 was the boy whose complaint against Sandusky was dismissed by Centre County District Attorney's office in 1998. But Corbett's investigative team (by then, all of two investigators) never found him. His mother found them - 21 months after they claim to have started looking.

Victim 2, the boy whom then-graduate assistant Mike McQueary saw in the shower with Sandusky in 2001, was not identified before the trial. An anonymous email tip to the Centre County D.A.'s office in November 2010 alerted investigators to the incident. Victim 2 has since contacted lawyers and intends to sue Penn State. (Note; media accounts differ on the date the Centre County D.A.'s office received this email. According to the Inquirer's account of Investigator Anthony Sassano's testimony, it was in 2010. According to Time magazine, it was 2008. Other accounts do not list the date. McQueary testified that he was interviewed by investigators in November of 2010.)

Victim 8, the boy whom Penn State janitor Jim Calhoun witnessed engaged in a sexual encounter with Sandusky in 2000, has never been identified.  Another janitor contacted investigators in March 2011 to report the incident.

Eight victims. None of whom was discovered by an investigator. Victims 1 and 6, or their mothers, approached investigators themselves. Victims 3, 4, 5, and 7 were identified by the mother of Victim 6. Victims 2 and 8 were not identified.

According to Not PSU's timeline of the case, based on news accounts, the Freeh report and Victim 1's book, Silent No More, Corbett's office learned of the 1998 investigation involving Victim 6 in June 2009. How is it possible investigators never contacted Victim 6's mother until she called them 18 months later?

It's a blatant lie that Corbett couldn't arrest Sandusky on the complaint of a single victim. Prosecutors, including Corbett, do it all the time. But if he's insisting that he needed to identify more victims, why didn't he try to find them?