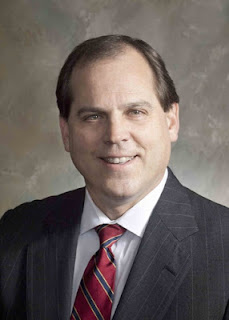 The ad begins, "When David Freed refused to prosecute campaign violations, one of  Harrisburg's most corrupt politicians walked."  It accuses Freed of "letting insiders escape accountability."

The campaign violations Freed refused to prosecute are the anonymous "robocalls" former House Speaker John Perzel unleashed against fellow Republicans in 2008. Freed said he would investigate, but never followed through. Perzel "walked," but he didn't get far, as Corbett later incorporated those charges into his 2009 indictment of Perzel. (Capitolwire 12/21/08)

Another "insider" who "walked" on identical charges - using the very same crooked consultant as Perzel - was Kevin Harley.

In 2000, Harley was one of five candidates in the Republican primary for the 37th House District in Lancaster County. On the eve of the election, the district was blanketed with illegal, anonymous robocalls targeting two of Harley's rivals.

Just like Perzel, Harley refused to take responsibility for the calls.  Harley claimed his campaign consultant, Don Raymond, "took it upon himself," to order the calls, and Raymond's lawyer issued an apology on his behalf. (Lancaster New Era 4/14/00 & Intelligencer-Journal 4/27/00)

Raymond was named executive director of the House Republican Campaign Committee before the ink was dry on his "apology" and he maintained his prosperous relationship with House Republicans right on through the Perzel robocall scheme that now dogs Freed.

Hawkes admitted, "Boy, was I naive."

The editorial board of the Intelligencer-Journal was not, so much:


"Before everyone believes the only explanation given -- that a political consultant, acting on his own initiative and without a candidate's knowledge, initiated 2,800 smear calls at great expense -- some people might want to ask a few more questions. Among them:

'Even if the courts eventually threw out this case, wouldn't it be worth presenting it simply to determine all facts? Right now, ideas vary about who is ultimately responsible for this dirty deed. Are some innocent people still being smeared?

'Within weeks of the election, why has Don Raymond landed a top political job working for House Republicans?

Raymond served as political consultant for losing candidate Kevin Harley and has taken full responsibility for ordering the calls and has apologized for them through his attorney. But some people believe a consultant does not do such things without authorization.

Some people might think that a consultant who could initiate these negative calls all by himself could not be trusted to work responsibly as executive director of the House Republican Committee, a campaign oversight and coordinating group.

Some people might even think that Raymond received this plum job in exchange for falling on his sword and protecting others in relation to the smear campaign." (Lancaster Intelligencer-Journal 5/31/00)

NOTHING TO SEE HERE

It started with a clandestine deal to build a politically-motivated criminal case against Democrats, who'd recently taken the majority in the House. It led to a three-year delay in taking a child rapist off the street. And House Republicans appear willing to go down with the ship to protect their captain's secrets.

Yesterday, Rep. Tim Briggs attempted to use a parliamentary maneuver to force the House to vote on a resolution calling for a review of Tom Corbett's shockingly lengthy investigation of child rapist Jerry Sandusky.  Rather than follow procedure and debate HR 520, which Republicans have kept bottled up in committee for nearly a year, Speaker Sam Smith abruptly shut down proceedings and House Republicans fled the chamber.

Now with a solid majority in the House, Republicans have more than enough votes to defeat the resolution and maintain their wall of silence on the politics behind Corbett's inexcusable delay.
But despite trotting out their spokesman to make their lame excuses, Republicans don't have the courage of their purported conviction.  If HR 520 is bad policy, as their spokesman claims, why not simply vote it down and move on?

Because Pennsylvanians overwhelmingly disapprove of the way Corbett handled the Sandusky case, and they desperately want answers to the questions behind the years-long delay.

The conundrum House Republicans now face is how to protect their party's leader from scrutiny that would reveal Corbett's shockingly self-serving and callous motivation for putting the investigation of a child rapist on the back burner, while still protecting themselves from consequences of an unpopular vote.

But, as the song goes: if you choose not to decide, you still have made a choice.  A vote to kill the resolution probably would've made House Republicans appear slightly less ridiculous than fleeing the chamber in terror did.

In March 2009, when the original Sandusky complaint landed on Corbett's desk, the Office of Attorney General was reeling from the public revelation of a "smoking gun" email implicating House Democratic Leader Bill DeWeese in awarding taxpayer-funded bonuses for campaign work.

Any examination of Corbett's actions at that point in history would inevitably lead to the reason why DeWeese had not been charged in the "Bonusgate" scandal - a shady "negotiation" between Corbett and DeWeese that resulted in DeWeese turning over thousands of documents and e-mails to implicate others while abandoning a legal crusade to quash subpoenas and exclude evidence in the case. DeWeese previously had vowed to fight "all the way to the Supreme Court" and the legal wrangling could've taken a year or more.

As a result of those political decisions, a child rapist remained on the street for years. Whether Corbett ever has to face the consequences of his craven self-dealing depends in part upon the willingness of House Republicans to continue to act as human shields.
Posted by Signor Ferrari at 8:14 AM 14 comments:

YOU CANNOT ARGUE WITH A CONVICTION RATE 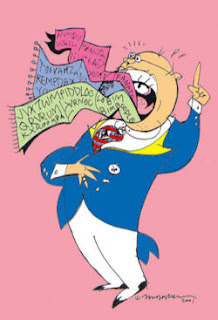 "The jury verdict is a vindication of the thoroughness of that investigation. 45 of 48 counts cannot be argued with." Kevin Harley, spokesman for Governor Tom Corbett, Scranton Times-Tribune, 9/27/12

As criticism mounts of the creeping pace of Tom Corbett's nearly 3-year investigation of child rapist Jerry Sandusky, Corbett's go-to defense is that Sandusky was convicted on nearly all 48 counts.

According to Corbett, this fact alone justifies the investigation's many, many flaws.

As Attorney General Candidate Kathleen Kane points out, there's no reason to believe Sandusky wouldn't have been convicted on most - or all - counts if the case had been brought years earlier. How the investigation was served by waiting nearly two years even to begin interviewing witnesses is unclear.

But if a conviction rate alone is proof of an unimpeachible criminal investigation, what then should we infer from the fact that defendants affiliated with the House Democratic Caucus who went to trial were acquitted of 117 of the combined 139 charges against them?

We don't need the dismal conviction rate to know the investigation of Mike Veon and a crew of staffers was flawed, starting with the fact that the Leader of the House Democratic Caucus, H. William DeWeese, was permitted to pick and choose what evidence to turn over to Corbett.

DeWeese himself was not charged in connection with any of the evidence he turned over, nor were his top aides Tom Andrews and Kevin Sidella, despite the fact that emails in the case directly implicated them.

Virtually every witness in the case against Team Veon was represented by a lawyer hired and paid by Caucus Leader DeWeese. The very prosecutor who carried out Corbett's case against Veon acknowledged - in another case - that such an arrangement represented a conflict of interest "because the lawyers ... were being paid by the [institution] while advising potential witnesses whose testimony could hurt the [institution] and its leaders."

"You don't have to stretch your imagination to see the chilling effect that will have," the prosecutor said.

The witnesses' lawyers in the case against Team Veon were being paid by the Caucus while advising potential witnesses whose testimony could hurt the Caucus and its leaders. But Corbett wasn't concerned about any "chilling effect" on the witnesses in that case, because he'd already decided not to charge DeWeese before even examining the evidence (that DeWeese himself had personally selected) or hearing from those witnesses (who were counseled by lawyers hired and paid by DeWeese).

That decision to spare DeWeese would, of course, come back to haunt Corbett in 2009 when a "smoking gun" email surfaced, in which DeWeese acknowledged awarding taxpayer-funded bonuses in exchange for campaign work. That revelation was followed by a wider examination of an abundance of evidence implicating DeWeese and his aides.

His scheme to spare DeWeese now exposed, Corbett became desperate to build a separate case against DeWeese as a distraction.

Corbett already was facing accusations of partisanship, having charged only Democrats in his signature corruption case, and was on an equally desperate mission to build a case against deposed Republican Speaker of the House John Perzel.

Corbett had to bring both indictments by the end of 2009, or "he risks being accused of using [the investigation] to launch what many expect will be a gubernatorial bid in 2010," according to the Patriot-News.

It was precisely when DeWeese's "U R welcome" email surfaced, in March 2009, that the Sandusky complaint landed on Corbett's desk. Faced with a choice of trying to salvage his politically-motivated legislative investigation in politically-expedient time, or taking a serial child rapist off the street, Corbett chose politics over protecting children.