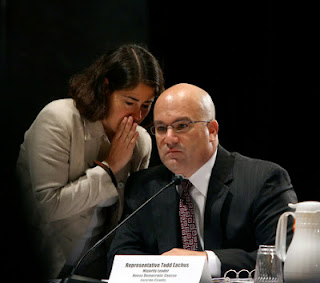 He became House Minority Leader in January 2009 after the original "Bonusgate" indictments shamed H. William DeWeese out of the post.

Although Eachus was overlooked in Gubernatorial Candidate Tom Corbett's original investigation, Corbett soon became embarrassed when evidence of Eachus' complicity was leaked to the media, and became became part of the official court record.

As part of the Corbett campaign's massive two-year attempt to cover his ass, Eachus was cordially invited to testify to a grand jury. Such invitations are regarded as a harbingers of impending indictment, and indeed, Eachus' fellow invitees, H. William DeWeese and Steve Stetler, were indicted.

Eachus was not, and we're still wondering what it means.

b) Corbett did intend to indict Eachus, but someone or something deterred him.

Any guesses?
Posted by Signor Ferrari at 1:52 PM 61 comments: 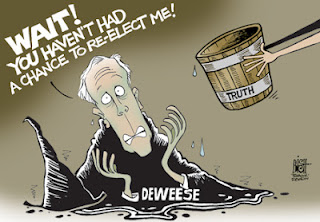 H. William DeWeese has been convicted of some crimes, and escaped indictment on other, more serious crimes. But he'll never face trial for his greatest offense: his deep and abiding cowardice.

DeWeese took every opportunity to blame others for his own misdeeds. He wasn't just willing, but eager to see the careers and reputations of his colleagues and staffers destroyed in order to protect his own.

His response, when those staffers who devoted nights and weekends to DeWeese's own cause were arrested: "Obvious, buoyant joy and ebullience." It was, he said, "one of the best days of my f-ing life." Colleagues said, "He was like a kid on Christmas."

In the run-up to the Mike Veon trial, Veon's defense was mocked for pointing out that dozens of lawmakers and staffers engaged in the same activities as those for which Veon was arrested. His message was simply, "If what I did was criminal, why aren't all these others charged with crimes as well?" His question remains essentially unanswered.

DeWeese, on the other hand, was happy to stipulate that crimes had taken place, as long as he could blame others for them.

DeWeese is under the wildly misguided impression that his appeals will be resolved in time for him to take office next January, if he is reelected. We predict his faith in his eventual exoneration is so strong that he will refuse to resign after his sentencing in April, and that he expects an expulsion resolution to fail.

One thing we do expect, is when DeWeese eventually is forced from the House, his colleagues will send him off with accolades, applause, and a standing ovation on the House floor. And for that, they should be ashamed.