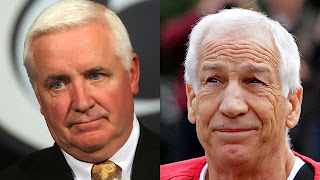 As many have suggested, then-gubernatorial candidate and Attorney General Tom Corbett botched his so-called investigation of the legislature in 2007 by investigating only one of four "potential targets:"


"If I have four potential targets, and I think they all might be involved in the same thing, and if I go to house A and take all the evidence out and wait two years to go after B, C and D, there’s not going to be any evidence in B, C and D,” he said. “What you do is you have to swoop in all at one time. What you do is you have four targets, and you say, ‘OK, we’re going to execute search warrants — boom.’ And you go in and you take everything out,” he said. “You take the boxes of files, you take the computers, you take everything out.” *


That's what a responsible prosecutor would do, if he or she actually were investigating a possible crime. Corbett was not. He was a politician with his eye on the Governor's Mansion, looking for good publicity (and perhaps some valuable goodwill from House Republicans), so he set his sights on House Democrats alone. But Bill DeWeese's legal maneuverings threatened to drag the case on past the point of political advantage, so he entered into a negotiation with DeWeese to gain evidence on his colleagues and underlings.

He timed the arrests and preliminary hearing right before the 2008 legislative and attorney general elections, and the trials would wrap up just in time for the 2010 Gubernatorial race. Perfect!

But things weren't going as smoothly as Corbett had hoped.  Accusations of partisanship forced him to find a Republican to indict - a task complicated by the fact that he'd allowed those same Republicans to dump the computers where evidence might be stored. (Who could've predicted that would happen?)

With evidence missing and witnesses stonewalling, Team Corbett was in a frenzy in late 2008 and early 2009 trying to build a Republican indictment.

In March of 2009, in the middle of this frenzy, two things happened. The sexual abuse complaint against Jerry Sandusky landed on Corbett's desk. And the Tribune-Review published irrefutable evidence that DeWeese had been complicit in the bonus scandal. (Evidence, we remind you, that had been in Corbett's possession since the fall of 2007. We further remind you that DeWeese never was charged in connection with illegal bonuses or any of the caucus-wide activities at the heart of the original "Bonusgate" scandal, despite ample evidence of his involvement. He in fact invoked the Fifth Amendment to avoid testifying in the "Bonusgate" trial.)

"During the Bonusgate investigation, we had a shortage of investigators in Harrisburg," Randy Feathers, lead agent on the Sandusky case, told the Altoona Mirror.  His admission has received remarkably little media attention given the public outrage over the length of the investigation.

Why did it take so long? It took so long because nearly everybody in the Office of Attorney General was busy in 2009 trying to indict DeWeese and John Perzel before the end of the year.

* If just one more Corbett apologist drags out the tired and discredited excuse that he had to investigate House Democrats first because they allegedly were "destroying evidence," so help us we will turn this blog around and slap you with our ring hand. It's both false and illogical.
Posted by Signor Ferrari at 2:40 PM

Signor Ferrari,
Your analysis is right on the money. Now the question is, will the General Kane investigation report the facts and indict where needed.

Corbett and Fina abused the law and have been allowed to walk away. Does the law mean anything in PA?

Please help to focus the public on Corbett and his gang of tainted prosecutors.

Signor Ferrari,
This is one of the best summations of events.

One thing that disturbs me is the crime itself. The victims have had a part of their life permanently taken away.

I believe this wasn't normal politics or malpractice, this was an enablement of a heinous crime.

Compared to holding up a bridge for three days, well..

Thank you Signor. The resulting questions remain as to why Corbett then targeted Penn State in Sandusky, and not those really responsible such as CYS, DWP and most importantly the 600K donating The Second Mile while the shredder trucks were in full force at their offices. Hopefully Kane will reveal this information to us soon.

Signor, referencing the comments from Anonymous of Jan 16 9:32 PM, was Republican Tom Corbett protecting the Ridge/Schweiker Administration from criticism relative to the Sandusky incidents of 1998 and 2001?
Regarding The Second Mile, isn't it true that Sandusky's boy's club turned out to be a political "cash cow" for Corbett.
Corbett and Sandusky became equally tied to the same orgamization. One for money and one for sex.

Slowwalking maybe not just Corbett problem. It's been a year; Kane has no Sandusky probe report, apparently no Harrisburg fiscal crisis investigation-both sitting on her desk. Disappointing. How about investigations into DRPA activity or Phila. Family Court building? Without grand jury investigations we won't know.

In my opinion, all of Corbett's Investigations were oust the Democratic Leadership and control the Republican Leadership to change the LCB to Private Corporations, sell the Lottery, and put in Voter ID.

Though Corbett has claimed to be a champion of fiscal discipline as an excuse to cut millions from social services and education, he has irresponsibly spent $4.6 million dollars of taxpayer money on this fruitless and ridiculous pursuit.

Tom Corbett’s attempt to sell the management of the Commonwealth’s lottery to an overseas English company funded by an Investment Fund in Canada and would have hurt the very people the lottery was intended to help, Pennsylvania seniors.

I am glad that the bid has ended and our seniors can now feel more secure, but are astonished and infuriated at the fiscal irresponsibility of Tom Corbett’s administration.

Now Corbett needs the same investigation he put on others while ignoring his Second mile Contributors that included Jerry Sandusky.

Karma the executed deed, work,
action, with intent as metaphysical residue left in the actor.

A good action creates good karma, as does good intent.

A bad action creates bad karma, as does bad intent.

Corbett's planned Leadership Coup to the Governorship misusing his AG Office on Bonusgate and Computergate, and why Sandusky Second Mile Gate never was investigated properly and when Corbett is osued he will be facing charges like McConnell in Virginia.

Corbett leaves us with the highest gas tax in the nation, poor infrastructure, a pension mess and a downgraded environment. But his lobbyist seat is secure and his bank account will be full, but is still disgraced in the end.