CAN INVESTIGATOR AND KANE BOTH BE TELLING THE TRUTH? YES. 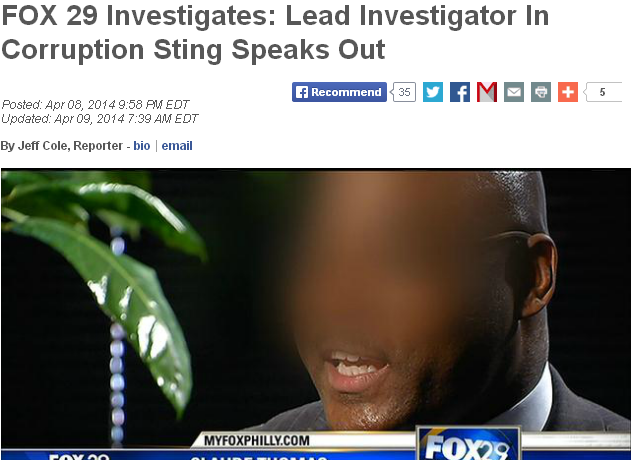 The lead investigator in the Philadelphia sting operation that Attorney General Kathleen Kane shut down – in part because of possible racial targeting – this week came forward to deny he was ordered to target African-American legislators.

“No one would, again, ever suggest asking, ordering me to target members of my own race or any race.  It just would not happen," the investigator, who now works for Philadelphia District Attorney Seth Williams, told Fox 29.

There are 23 members of the Pennsylvania Legislative Black Caucus, most of whom represent the Philadelphia area. It’s entirely possible the investigator was instructed to focus on some or all of these members by name, without anyone mentioning their ethnicity or their membership in the Black Caucus. It may not have registered with the investigator that all of the targets were people of color.

All but one, that is.

"There was several members of both the House and the Senate, Caucasian as well as African-American, who requested a number of things,” the investigator told Fox 29.

He doesn’t mention how many of the targets were Caucasian or who they were (And Fox 29 didn’t ask. Tsk, tsk, Fox 29).  Of 113 recording sessions conducted throughout the sting, there are only two white “targets,” one of whom “is on tape merely because he happens to be in a room with two black targets.”

Apparently, the sole white target of the sting was a legislator who had enraged then-Attorney General Tom Corbett in 2010 with his criticism of Corbett’s legislative investigation as politically motivated.

“He started to explode,” Rep. John Galloway said. “He was this close to my face. ‘What do you know? I’m gonna send agents.’”

Send agents he did.  Galloway said, “One sits here like this, focuses right on me, and he’s asking me 'What do you know? Where did you come from? Why did you say what you said?' Another guy starts walking around, looking at my family pictures. 'Is this your daughter? Is this your wife? What does she do for a living?' Picks up papers, intimidating like you wouldn't believe.”

Galloway’s appearance on the recordings does not exactly make the case that the targeting process was impartial, but it does give the investigator cover to say that both whites and people of color were targeted.
Posted by Signor Ferrari at 2:47 PM

Typical liberal trash playing the race card when your trapped like a bucked tooth rat.

"No one would, again, ever suggest asking, ordering me to target members of my own race or any race. "

I understood that the original injunction was to not pursue white legislators. No need to mention "black". Is there?

Commonwealth Law Enforcement To Right Of Them?

Federal Law Enforcement To Left Of Them??

City/County Law Enforcement In Front Of Them???

Independent Law Enforcement Closing Behind Them????

While asking for some kind of clue or road to lead us to the truth?????

In the rooms of dark and shades, the scent of sandal still pervades, the colored thoughts in muddled heads??????

Come on and join the con, ain't nothin' gonna get in your way, They gonna roll this con, cross the Commonwealth.

They all try to be smart, then by taking it to heart, cause it hurts when their egos are deflated, they don't realize that it's all compromise, and the problems are so overrated!

He big problem Frank Fina and now Seth Williams has is that racisms is no longer openly avert in practices or outright conducted. It is seen by the pattern of the disparate impact that develops by the results!

Of course, no one told Frank Fina to take down people or lawmakers of any color and none of Frank Fina’s feigning or framing that argument can be successful in any defense of his own racial actions.

The facts of this intended misguided and flawed investigation speaks for themselves just kike the Grand Jury Reports leaked by Frank Fina’s Investigators and never properly investigated that violated the constitutional rights of American and Commonwealth Citizens for the glory of Attorney General to become a Governor.

Seth Williams thought he could ride this white knight steed to future higher office too, but the steed is seedy, sloppy, and more scoundrel than righteous prosecutions. Seth made a mistake and keeps making it, at some point he will withdraw but after being branded by his own arrogance.


It is good to see the exposures of the patterns and practices of Frank Fina selective, bias, political, and now racist prosecutions becoming known.

The Totality of Frank Fina actions now have a pattern of misusing Investigators, Grand Juries, from Bonusgate to Sandusky to Racists gate.

Seth Williams will abandon Frank Fina in the end when it all comes out, watch, and see?