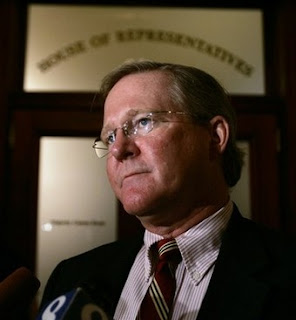 A Captain Renault post: The House Republican caucus seems to be an ungrateful bunch. Attorney General and Space Cadet Tom Corbett did everything he possibly could to help them in the November election and now they tell him to kiss off!

Now that Corbett has been backed into a corner and has to at least appear to be "investigating" the Republicans, the House Republicans return the favor by fighting Corbett and stonewalling his investigation. According to several reports in newspapers across the state, Corbett had to go to court to "force" the Republicans to honor the grand jury subpoenas served on the House Republicans. If this matter wasn't so serious it would be funny. Corbett spent all of his time looking at the Democrats while making sure the Republicans knew what was happening and giving them lots of time to make sure there wasn't much "evidence" around once Corbett got around to going though the motions of investigating them. There were even reports in the media this past summer of the House Republicans replacing and destroying their computer hard drives right in the middle of of the ongoing grand jury process. It seemed very blatant at the time but Corbett didn't seem to react at all to that bombshell.

So while the Democrats allegedly were shredding a few boxes of material, the House Republicans were replacing and destroying all of their hard drives. And Corbett now wonders why he can't find enough evidence on the Republicans?

Many rational observers have said Corbett was conducting a mismanaged investigation from the start by spending all of his time on the Democrats while giving the Republicans a pass for so long. Even to this date, there is no indication of any action by Corbett towards the Senate Republicans. The Senate Republican staff had some of the biggest bonuses awarded and were known in the Capitol to be very politically active -- and yet to date NOTHING from Corbett about them.

Looks like the Senate Rs are telling Corbet to get lost too.
Posted by Captain Renault at 12:23 PM

Are you really surprised? There is no loyalty like party loyalty.
Maybe Corbett really does want to run for Governor in 2010 and needs those Republicans.