EXCLUSIVE: BARMAID GOT CASH FOR VACATION FROM ALI DURING "STING" 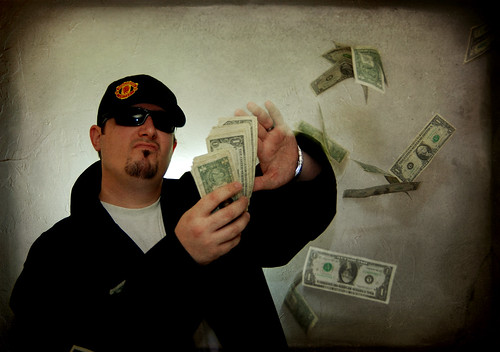 Confidential Informant Tyron B. Ali, while living a free-spending lifestyle at taxpayer expense in 2010 and 2011, at least once handed a Harrisburg barmaid an envelope containing $400 cash for her Caribbean vacation.

The barmaid declined to speak for the record for fear of losing her job or damaging her establishment's reputation.

Ali spent more than $90,000 in taxpayer funds while working as an informant for then-Chief Deputy Attorney General Frank Fina in 2010 and 2011. The money includes about $22,100 in “payments to suspects.” Attorney General Kathleen Kane, who declined to prosecute the sloppily-executed sting, said $32,600 was unaccounted for.

It's unclear whether the cash Ali gave to the barmaid is among those expenses.

Ali befriended the barmaid during 2010 as he was trying to establish the persona of a high-flying Harrisburg lobbyist. The ruse was part of a sting, supervised by Fina, intended to ensnare legislators and others involved in the state political scene.

During that time, the barmaid was planning a vacation in the Caribbean. Ali told her not to buy a plane ticket, because he would take care of it for her. As the date of her trip approached, Ali still hadn't provided her with a ticket, despite her regular inquiries. About a week before she planned to leave, as she was asking about the ticket, he went to his car and retrieved an envelope, which he handed to her. It contained $400 cash, which he told her to use for her trip.

It was only after the Philadelphia Inquirer broke the story on March 17 that the barmaid realized that the money likely was part of the taxpayer-funded slush fund Ali was using to attempt to bribe legislators.

Were plane tickets to the Caribbean for Ali's barmaid pals among the legitimate expenses Fina approved for the failed sting? Or was this $400 part of the $32,600 that went unaccounted for? Were there other spontaneous acts of generosity benefiting Harrisburg's hospitality workforce? As much as $32,600 worth of spontaneous generosity?

Either Frank Fina approved of Ali handing out cash to his barmaid friends, or Fine had absolutely no idea what Ali was doing with tens of thousands of taxpayer dollars. Which is worse?
Posted by Signor Ferrari at 12:49 PM

Anyone wonder why the sting story broke a mere one month after it was reported that over 20 million Old Guard OAG e-mails had been discovered?

Fina dropped 2,000+ counts against Ali who gave taxpayer money to a barmaid.

So, regarding the Ali sting, what is Judge Hoover withholding from the public?

Fina destroyed witness and proffer notes in order to gain convictions. We now know that Ryan, as acting AG, destroyed OAG emails. If the legislature had destroyed emails according to the Ryan Administration email destruction policy, Corbett would not have received the FREE press that carried him into the Governor's Mansion.

Kane was drawn into the Philly Sting by a clever Fina. She and her staff now know the ugly force behind Fina and Corbett.

Looks like Fina gave Ali a few gifts too, in order to do his bidding accusing prosecutors of destroying or not preserving evidence.

These cases are becoming fractious between the prosecutors, lawyers, with the media trading allegations of misconduct.

Clearly, what is known to date is Frank Fina created this subterfuge intentionally and the timeline is proof of it.

Just like the Acting AG destroyed all emails, notes to remove any ability to find concealed evidence.

They never expected a Democrat AG would be elected and that has upset them even more, so they went on this expedition to deflect other investigations or inquiries to mask their previous machinations of the Pennsylvania Attorney General Office.

There is no need to elaborate with more words when their actions reveal their true intent to cover their previous Prosecution Misconduct.

Fina and his own Band of Prosecutors will soon be making serious public allegations against the PAOAG File causing evidence to be destroyed and soon will be calling the PAOAG & Defense Attorney an unindicted co-conspirator.

The only surprise revelation is how Seth Williams made the wrong decision to join them instead of distancing himself from this Cabal of corruption disguising itself in the name of Justice.

Seth's Pride has become the step before his own fall, and should know better.

Hey Frankie Fina: SHOW ME THE MONEY! SHOW ME THE MONEY! HAHAHA. This is the funniest damn story I have heard in a long time. Fina is such an idiot. The sting was stung. I won't be surprised if we eventually find out that the tape recordings were a setup by Ali and he never actually passed the cash to the politicians - he just pocketed it himself.

Signor Ferrari,
Several OAG prosecutors suddenly found jobs with the Philly DA's office when Kane was elected our new Attorney General. Corbett has followed the age old political tradition of taking care of those loyal to him. So where did Seth Williams find the money in his budget to hire all of Corbett's prosecutors? How much state money went to the Philly DA's office to support the new hires? Maybe that explains Williams' loyalty to Corbett and Fina. Williams has sipped the Koolaid.

Why did Corbett and Fina open the Philly Sting in 2010? They were extremely busy with numerous investigations and pending trials.

Could it have been their plan to go after the "corrupt" legislature should Corbett have lost the Gubernatorial election in November 2010?

If Corbett had lost, he would have been Attorney General for two more years and Fina would have had open access to indict all political enemies.

The truth is coming out, the corruption was with Corbett, Ryan, Kelly, and Fina's group of prosecutors. It took a man like Ali to carry their water since he was in serious legal trouble with nowhere to turn. An honest person would never had committed to work with Fina & Company.

After the election in 2010, no one could have stopped Corbett's OAG Team.

News reports have outlined Fina's plan. Ali was given state monies to administer a major sting on legislators and lobbyists. Why no indictments? Corbett won the election and became Governor. The risk was high that the sting could have hit his "friends" in the lobbyist community. He had few friends in the legislature.

Kane's staff has learned to think politically since Corbett and Fina do not act by the law.

FINA will be the next AG, Wait and see.

Yes, Fina will be the next AG.
"A"dmitted to
"G"raterford.

Recall what happened to Mike Nifong--the DA who prosecuted the Duke lacrosse players.

I cant believe all you idiots drinking the Kane Kool-Aid, Fina did an oiutstanding job finding who the criminals are did he have help sure and he used the oldest trick in the book making a deal this is done everyday wigth criminals so dont act like this is something new. FIna should sue Kane for destroying his character. If Fina runs for AG i would vote for him early and often. the philadelphia way. the same people who took the money taught the people of philly how to vote early and often. But what happened with that nothing hopefully the good ol boys club can put a stop to it.......

Far too many skeletons in that closet.

Will be appointed. Then run and win Easy.

Best prosecuter in the country, just ask your friends. He put enough of them in slammer.

You've just outed yourself as clueless.

Harrisburg's worst-kept secret is what Corbett really thinks about Fina.

Fina carried Corbett's water for several years. He used whatever method possible to get Corbett elected. Is it possible he will rat out Corbett? Just what is the relationship between Corbett and Fina, in your estimation?

You sure do wish that I would edify you, don't you?

Get your game up.

Signor Ferrari,
Is OAG or Philly DA responsible to the taxpayers for the unaccountable expenses caused by Fina's failure to supervise?

Also Judge Hoover is still holding his decision on Baldwin in the PSU Three case. This gives OAG time to justify their case relative to the destruction of emails caused by the Corbett administration.

We are getting close to D-Day for Fina and Corbett

Signor Ferrari,
Last night during his Primary Election Victory Speech, Tom Corbett proclaimed that "from now until November, Jim (Lieutenant Governor Cawley) and I will be working every day, campaigning across this wonderful, beautiful Pennsylvania."

Corbett, Fina and his team of prosecutors sent people to jail for allegedly performing campaign work on state time. What do you call this? A Campaign Office working hand-in-hand with the Governor's Office to get the boss re-elected.

The taxpayers of Pennsylvania will be paying for Corbett's driver and security during all campaign activity. How can you send people to jail for allegedly "Theft of Service" charges when you are doing it yourself. The taxpayers should be reimbursed for the state employees working on campaign assignments.

I hope D-day falls right after the Governor signs the Budget.

"What's that I smell? Mendacity?""
Corbett reeks of the stench of Mendacity.

Where is the media coverage of this angle?

Corbett collected less votes than Jim Cawley in the Primary?

Altoona is a place that Republicans usually garner 30,000 in a primary, Corbett attracted 10,000??

Corbett is doomed for the November election and Cawley should be the Candidate???

The G.O.P. is now known as Going Out Pennsylvania, Tank You Tome Corbett!!!!

You Mean.....Tank You Tomb Corbett Politically On Life Support And A Near Election Death Experience At Hand, The Reckoning Is Nearly Complete!

Thank You Frank Fina too, The New Governor Needs To Appoint An Independent Prosecutor On His Illegal and Unethical Actions!

Frank Fina has left a path of destruction with every case he handled. He was involved in the destruction of witness and proffer notes, destruction of OAG internal emails, muscling witnesses, pulling child protection professionals off the Sandusky investigation to prepare a favorable jury pool against the legislators.

Does this sound like a man who took an oath of office to protect the citizens of Pennsylvania?

A Federal Investigation is warranted.

Unfortunately, the judiciary has allowed prosecutors to manipulate the law in order to guarantee convictions. This is why our jails are overflowing with inmates.

The good old boys network of prosecutors too close to the judges has tainted the system.

We need a leader and a General Assembly to demand judicial independence and stop the political abuse of law enforcement activities in this state.

Corbett and Fina have set a new standard for judicial manipulation in this state.

I heard a radio ad on WHP this morning bought by PENNDOT.

The first words in the script were Tom Corbett, Governor.

The Legislature places a moratorium on mass public communications during an election year.

What is the policy for the Executive Branch of government?

The PENNDOT message had nothing to do with an elected supervisor.

At best, the Secretary of Transportation's name should have been credited with the message from his Department.

Corbett's own prosecutors were blind to their bosses violations.

PA State Police tickets should be presented to the offender as "brought to you by Governor Tom Corbett."