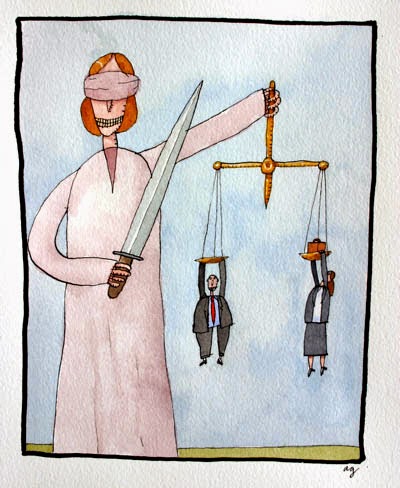 What has always shocked us more than Tom Corbett's cynical abuse of the Office of Attorney General for political gain is the insouciance with which the press corps has greeted every instance.


It’s an inherent government problem when a prosecutor gives a child molestation case short shrift because he’s obsessed with rehabilitating his botched political corruption case in time to launch a gubernatorial campaign.

It’s not abuse of office, it’s just a prosecutor exercising his discretion.

We suppose we should be grateful Sternberger acknowledged the situation at all. A more recent revelation that the OAG used its “discretion” to settle political scores was greeted with virtual silence.

Embattled prosecutor Frank Fina, likely to be a focus of Attorney General Kathleen Kane’s forthcoming report on the Sandusky investigation, took some heat when it was revealed all but one of the secretly-recorded targets of a lengthy  “sting” operation were people of color. But only one news outlet, the Doylestown Intelligencer,  bothered to mention that shortly before being targeted, Rep. John Galloway had  enraged Corbett with public criticism of his legislative corruption investigation.

No one from the OAG ever has bothered to explain how the targets of the failed sting were chosen – not that we’ve seen anyone in the media bother to ask -  but some Republican insiders were disappointed that no southeastern Democrats were snared in Corbett’s previous “Bonusgate” and “Computergate” investigations.

Why not exercise some prosecutorial discretion and try to kill two birds with one stone? Giving southeastern Republicans some grist for the mill while at the same time retaliating against an irksome critic? It's just an inherent government problem.

Posted by Signor Ferrari at 3:07 PM

Senior Ferrari,
Tom Corbett used his elected office to destroy political competition, garner public support and earn free media coverage state-wide for his re-election to OAG and his election to The Office of Governor.

Corbett lost the Ramaley trial in Dec. 2009. He then deprived the entire Commonwealth of the Child Protection Unit which was assigned to research the jury pool for the Bonusgate trial in early 2010. Let's not forget that there were more children and families impacted by this personnel reassignment than the Sandusky victims.

What was the reason for the Philadelphia Sting initiated by Corbett and Fina in early to mid 2010? In addition to the Bonusgate trial, 2010 was the year that Corbett ran for Governor. The sting, as reported in the papers, was created by Fina with plans to expand to Harrisburg. If Corbett had lost the election for Governor, he and Fina would have used the expanded sting to attack legislators and lobbyists for the next two years.

If AG Kane reports that Corbett abused his office for political gain, then the House of Representatives must step up and vote for Articles in Impeachment.

It is time for everyone in the Commonwealth to demand responsible government in Harrisburg!!!!!!

In her interview with the Patriot News AG Kane confirmed that the supervising agent, Claude Thomas, was not present during all of the exchanges. So Mr Fina, if Tyron Ali does not testify, how will you be able to prove beyond a reasonable doubt that money was actually passed and that the voices on the tape are, in fact, the voices of the defendants?

Seth Williams would be a fool to attempt to prosecute any cases involving gifts from Tyron B. Ali when he knows there is at least one barmaid in Harrisburg who can testify that she, too, was given at least one envelope full of cash. The sting was a disaster and the reason it was exposed was to attempt to discredit AG Kane ahead of the Sandusky report - not to bring any of the targets to "justice." Williams should fire Fina for leading him into this morass.

Prosecutorial discretion is a "Get Out of Jail" card for prosecutors. It is used very effectively to threaten witnesses with arrest. It is also used as an excuse to arrest innocent people, thus preventing them from appearing as witnesses and discrediting their court cases.

The system might be the best in the world, but it still smells when used by corrupt prosecutors and judges.

Early reports are that Corbett will be exonerated because of Prosecutorial Discretion. The law protects him from legal findings, but it can not protect him from public opinion. Campaign cash for kids. The truth should trump the law. Shameful.

Tom and Frank both Exonerated by Kane. Corbett for President, Fina for AG. When will you Guys do the right thing and apologize?

To Anonymous, June 9
Tom (Corbett) accepted several hundred thousand dollars of campaign contributions from the leaders of The Second mile (TSM), the same organization that provided access to kids for Jerry Sandusky's use. Surprisingly, Tom did not include TSM in his indictments.

Tom approved a mult-million dollar grant to The Second Mile (TSM) to build a headquarters building before he unapproved the grant. TSM no longer exists.

Frank (Fina) was the lead prosecutor when the Office of Attorney General destroyed hundreds of witness and proffer notes while preparing for trial. He was probably involved in the destruction of internal emails in the Office of the Attorney General. Frank created the botched Philly sting which his new boss, the DA in Philly, has decided to pursue.

As June 9 wrote, Tom and Frank certainly qualify for the Federal offices of President of the United States and Attorney General. Both Tom and Frank have demonstrated their grasp of public corruption and are more than qualified for Federal office. Right?

The system might be the best in the world, but it still smells when used by corrupt prosecutors and judges.

Reports in the press state that the Sandusky investigation went dormant for 4 to 5 months in 2010. That year, Corbett and Fina initiated the Philly Sting. Corbett was elected Governor and the Bonusgate trial was prosecuted.
How many cases did the AG's child protection office usually handle at one time? The discussion the past few years centers around Sandusky, but how many children in the state were abused while the AG's office was following prosecutorial discretion orders?
Sounds like Corbett/Ryan/Kelly/Fina used legal protocol to ignore the children of PA.
"Four More Years?" "Four More Years?" "Four More Years?"

Prosecutorial Discretion?
Fina blasted AG Kane over the Philly Sting debacle, organized and implemented by Corbett and Fina in 2010.

On June 6, the Philadelphia Daily News reported that Kane is reviewing a 2009 Grand Jury investigation of the former head of the Philly NAACP. There was a non-profit organization involved in numerous transaction.

Why did Corbett and Fina pass on indicting those responsible for the alleged miss-use of state grants?

Fina has earned a reputation for destroying witness and proffer notes, OAG internal emails and threatening witnesses in order to gain convictions.

Did the NAACP investigation lead Corbett and Fina to initiate the Philly Sting operation?

Have we lost the backbone of our freedoms, Law & Order?

Is Attorney General Kane responding to recovered AG office emails destroyed in 2011, when deciding to review Corbett and Fina's 2009 investigation of the NAACP in Philly? News today was the IRS destroyed office emails regarding "Tea Party" applications for non-profit status. Our very own judiciary finds this action acceptable.

looks like the Kane Report is now the last nail in Tom Corbett's Political Coffin, the smart political money is shifting to Wolf as we speak.

Tommy goes away to exile retirement and a forgotten loser by his friends and free man by his minions that miscarriage justice, and one of them may still being going to jail.